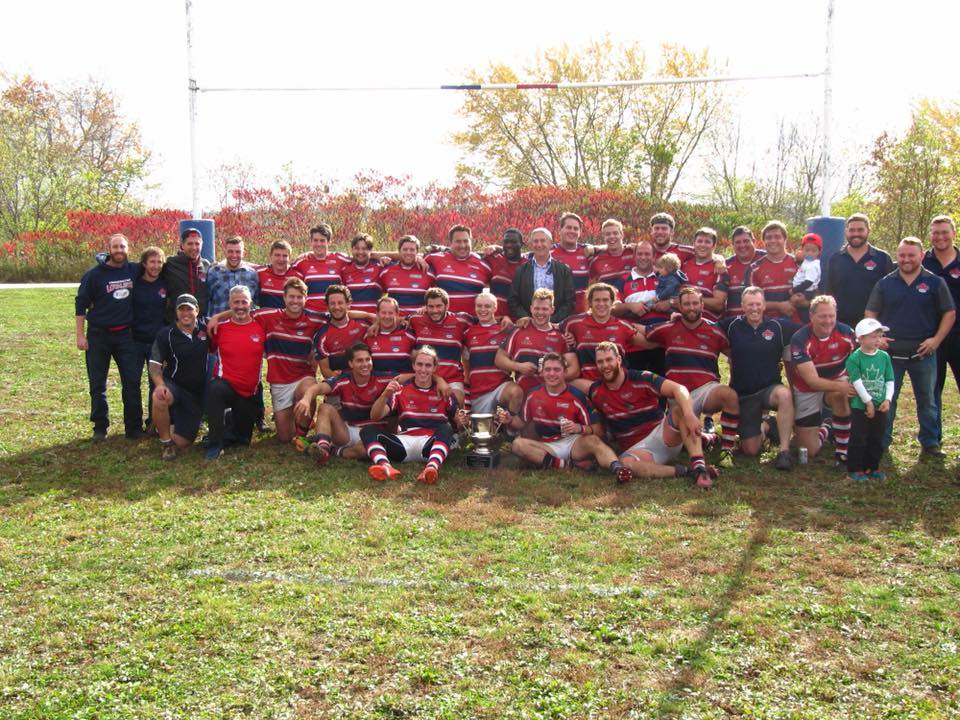 Congratulations to the Fredericton Loyalists on winning the Caledonia Cup 22-20 over the PEI Mudmen.

The Fredericton Loyalists are once again holders of the Caledonia Cup after defeating the PEI Mudmen 22-20 in a nail-biting encounter at Loyalists Field on Saturday.  A packed crowd watched as the two top club teams in the Maritimes vied for the coveted 95-year-old trophy with Johnny Cullen’s conversion of a Branden Howe try proving the difference.

Cullen missed an early shot at goal as the two evenly-matched teams went hammer and tongs from the opening whistle. It was Mudmen flyhalf Brodie MacDonald who would take the first points with a well-struck drop goal just shy of the 20 minute mark.

The Mudmen retained momentum and after several phases inside Loyalist territory second row Isaac Kirkland crossed for the game’s first try. MacDonald couldn’t convert but the visitors had a two-score lead. More back-and-forth action stretched through to the break but no points would come until Cullen sent through a penalty just on the stroke of halftime.

Things could not have started better for the Loyalists as they scored immediately after the restart. The ball was passed through several pairs of hands before fullback Eric DuPlessis touched down in the corner. Cullen couldn’t land the difficult conversion but the scores were level.

PEI got back on the winning side when No 8 Pat Davis powered over following several phases and MacDonald made it a full seven, but the Loyalists struck back immediately. Howe broke clean through the line and raced nearly half the field untouched to score under the posts.

The Loyalist defense put in several bone-shuddering tackles but the Mudmen kept coming and eventually worked an overlap out wide. Adam Fitzpatrick, one half of an impressive twin duo in the midfield with brother Aaron, took the outside and with a stuff arm freed himself to score a crucial try. Again the tricky angle and a sneaky breeze hampered MacDonald’s conversion attempt but the Mudmen had their lead.

It was into the final minutes when a wide ball went to Emil Sehic and after the winger made good yardage it was Howe again who tore down the line outside him to score his second. Cullen’s conversion sailed through the posts to give the home side the tenderest of leads. MacDonald had one last chance to win it for the Mudmen with a 45 metre penalty but it fell agonizingly short to the delight of the vocal spectators.